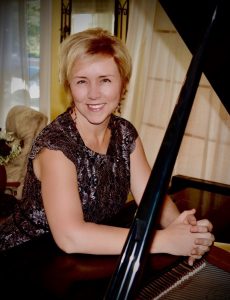 Pianist Natasha Kislenko, hailed for her “vividly expressive” interpretations and “virtuosity that left the audience exhilarated,“ (Santa Barbara Independent) offers unique concert programs and presentations to the worldwide community of music listeners. A prizewinner of several international piano competitions, she has extensively concertized in Russia, Germany, Italy, Spain, Slovakia, Bulgaria, Turkey, and across the Americas.

Ms. Kislenko made her Carnegie Hall solo recital debut after taking the Grand Prize at the Missouri Southern International Piano Competition in 1996.  A resident pianist of the Santa Barbara Symphony since 2010, she has been a featured soloist for the Shostakovich, Grieg, Clara Schumann, de Falla, and Mozart piano concerti, to great critical acclaim. In 2013, Ms. Kislenko was invited as a special guest to present the new Steinway D piano at the Teatro Municipal Ignacio A. Pane in Asunción, Paraguay, performing with the Orquesta Sinfónica del Congreso Nacional.

Ms. Kislenko has shared the stage with many distinguished musicians including Alban Gerhardt, James Buswell, Richie Hawley, Joshua Roman, and the Takács Quartet, to name only a few. She, along with the violinist Chavdar Parashkevov, released two CDs for violin and piano, “Russian Sonatas” and “Beethoven, Brahms, Mahler.” The Strad magazine praised her “limpid and beautiful pianism.”

In addition to a successful performing career, Dr. Kislenko has been a dedicated educator and mentor to the younger generations of aspiring musicians. A collaborative faculty member at the Music Academy of the West, CA since 2004, Natasha joined the faculty at University of California, Santa Barbara in 2007 after serving at California State University, Fresno for five years.